Our Year Three students have enjoyed author visits from Betty Johnston for a number of years.  This year, Betty indulged us by visiting twice and developing a new, hands-on program for our students.

One teacher wrote of the workshops:

The first session was focussed on the writing process that Betty followed when creating 'Mrs Echidna's Dilemma' and how each character came to life.  Betty took them through the steps of character development and left them wiht the challenge of writing their own character to be included in the book.

At the second session, the students were very excited to share with Betty the characters they had created.  Ths last session was bery interactive, with a focus on the visual elements of the book.  The students were set up in groups and moved around rotations that focussed on different elements, from the anatomy of echidnas to the fabrics used to create the original 'Mrs Echidna's Dilemma' quilt.

The students were so engaged during both sessions, and we look forward to Betty visiting us again next year. 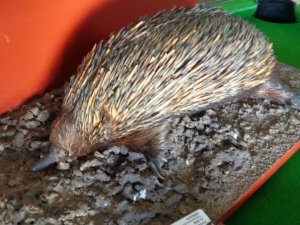 Students used basic science strategies with an echidna specimen, observing its physical characteristics. They measured the length of the snout & looked at the placement of the nostrils; noted the direction the front and back feet faced (did YOU know the back feet face 'backward', not 'forward'?); observed which parts of the body have the short fur; discussed how the spikes are formed. 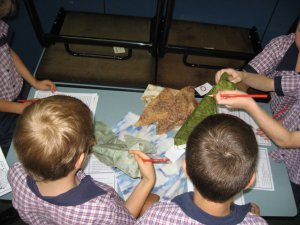 Students were also presented with a variety of textiles and asked to consider which best represented elements of the story.  Some were printed fabrics, which could graphically represent natural features; others were very tactile textiles; another table demonstrated different techniques that were employed to create pictures - using ribbons, threads, needle-punch and other things. 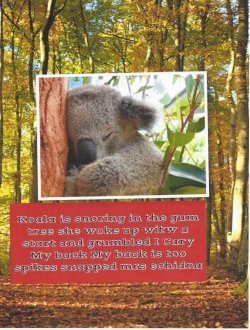 The student's final task was to write an extra character for the story, using the cadence of the original narrative.  Their work was such a high standard!